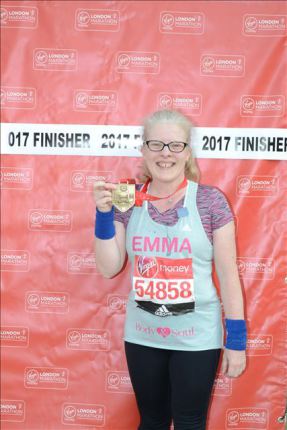 I DID IT!!! On Sunday 23rd April 2017 I completed the London Marathon in a time of 5 hours and 56 minutes...it was an incredible feeling and quite emotional to cross the finish line on the Mall knowing that I had achieved the challenge I set out for myself.

The physical and mental training I put myself through in the months leading up to the race were hours well spent. I had set myself the target of 6 hours to complete the 26 miles 385 yards so I was delighted to have come in just under that.

My fundraising will continue for three more months to cover the end of the academic year.

In total I raised £3,805 for Body and Soul - a huge thank you to everyone who donated to help me surpass my goal.

2017 marks my 26th year of living with HIV and I decided it would be a great opportunity to set myself the challenge of running 26 miles 385 yards to mark the occasion.

I have been given a place by the charity Body and Soul which I helped to establish in the 1990s to run on their behalf.

Body and Soul delivers a proven transformational programme for people of all ages who have had adverse experiences early in life. Set up 20 years ago to support children, young people and families living with HIV, the charity has pioneered an holistic model of care that has now been extended to other groups, including teenagers who have been adopted and young people who have attempted suicide. Body and Soul believes that no one should have their life chances reduced because of traumatic experiences in their past.

The charity does amazing work for many thousands of individuals and it is my honour to be running the marathon on their behalf.

I will be fundraising for them and any donations towards my target will be greatly appreciated and encourage me through the months of training and on the race day itself.

It is less than 100 days until the London Marathon on 23rd April 2017 and I thought I should update my progress. I started well but the development of plantar fasciitis in my right foot set me back considerably as I was unable to train for the last month. Thankfully due to some ultrasound massage treatment and daily stretching exercises I have been able to resume training again this week.

I am now slowly building up my stamina again with short training sessions three days a week with the aim of a longer run on Sundays. My busy schedule of school visits to deliver Positive Voice talks means that I have to go beyond my comfort zone and get out of bed early and do a run before my working day starts - for anyone who knows me, this is quite an achievement!

Really proud of my recent efforts my last two training runs have both been half marathon distances in under three hours. Still a long way to go but this was another psychological and physical barrier to overcome.

Training is not the most enjoyable activity but as the spring sunshine starts to fill mornings and afternoons it makes it a little more enticing to get the trainers on and get out and move forward with this challenge.

Never hurts to get words of encouragement so if anyone want to urge me along then send me a message on Twitter @emmacolehiv.

And don't forget while I am doing this as a challenge for myself it is ultimately to raise funds for Body and Soul so if you can make a donation please use the link above.