“Time to accept – the result is positive” so read an entry in my journal on September 11th 1991. That was the moment that I, a young, white heterosexual woman, realised that the Human Immunodeficiency Virus (HIV) did not discriminate; it wasn’t just a disease for gay men, haemophiliacs or injecting drug users it had the potential to infect any sexually active person and that now included me.

2022 marks 31 years since that fateful day when my life changed irrevocably. In that time many advances have been made with respect to HIV and AIDS but what has changed little in that time is the fear, ignorance and stigma that surround this particular disease.

I made a decision after my diagnosis that I was going to speak out publicly as an HIV positive woman in an attempt to breakdown the misperceptions that many had, and still have about HIV. In delivering my Positive Voice talks I not only continue that commitment but also now bring the perspective of a long-term survivor.﻿ 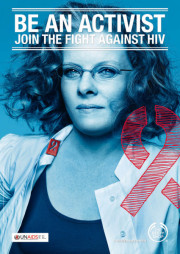